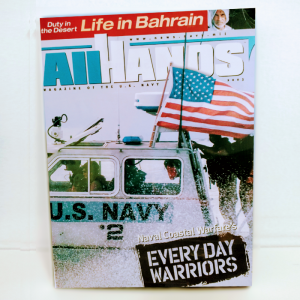 John grew up in the countryside outside of Olympia.  After graduating from Olympia High School, John joined the Navy instead of going directly to university.  That decision had a profound impact on his life and success.

During his service in last days of the Vietnam war and subsequent cold war,  John learned leadership, responsibility, and accountability.  The Navy trained him in advanced digital electronics and he conducted electronic intelligence work with a top government security clearance.  During his college years, John joined the Navy Reserve.

Alongside his professional and family obligations, John served in the Reserve for 24 years, attending the U.S. Navy’s Senior Enlisted Academy, leading his river boat unit during combat operations in Kuwait and Iraq, and for two deployments to the Korean peninsula.   He retired in 2008 with rank of Master Chief Petty Officer. 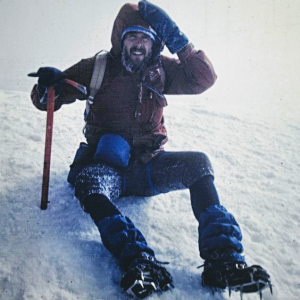 While at North Seattle,  John served as President of the College’s Alpine (Mountaineering) club,  and then as a Representative, Vice-President, and, finally, President of the student government.

John attended the University of Washington, graduating in 1986 with a Bachelor of Science degree in Construction Management.

John has worked as a cost engineer for the architecture firm NBBJ and as a Resident Engineer for Seattle/King County METRO for over 30 years, specializing in major transportation and wastewater capital projects.

John retired from Seattle/King County Metro in 2017 and currently works as a senior construction manager for Kpff Consulting Engineers. 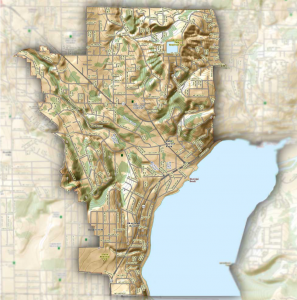 John served on the LFP Transportation Commission for 10 years, including his last year as chair of the commission.

His work on the commission helped Lake Forest Park secure a $500,000 grant for a park & ride within the city, which the City is currently using to perform its ‘Safe Highways’ design study.

While a commissioner, John also worked to re-write the transportation element of the City’s comprehensive plan in order to keep our major highways and arterials free-flowing and to reduce cut-through traffic in our neighborhoods.

John was a member of the 2008 Lake Forest Park Legacy 100-Year Vision project. 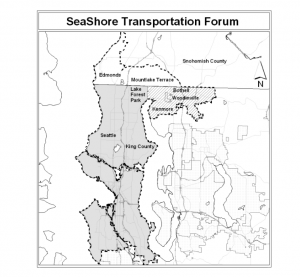 John has participated in the SeaShore Transportation Forum since before he joined the Council, and he currently serves as Co-Chair with Shoreline Councilmember Doris McConnell. STF’s members include King Country and the cities of Seattle, Shoreline. Kenmore, Bothell, Woodinville, Edmonds, and Mountlake Terrace.  Representatives from Sound Transit, Metro Transit, Community Transit, WSDOT, and the Puget Sound Regional Council also members.

John’s work through the SeaShore Transportation Forum resulted in a coalition of cities along SR-522 signing a letter to request specific developments for transit infrastructure by Sound Transit under the ST-3 plan. The coalition’s effort was successful, obtaining investment commitments for ‘early implementation’ projects for adding Park & Ride structures, roadway, signalization, pedestrian and utility improvements, and adding Bus Rapid Transit (BRT) service to feed frequent and rapid transit service from Woodinville to Link light rail at the NE 145th station.

Forming a public / private partnership in making these improvements also holds the potential to transform and re-vitalize our Town Center, with new facilities, restaurants and entertainment venues, in addition to the Park and Ride facility. Sound Transit officials have publicly stated that without the unified voice of this coalition, funding for these projects would not have been allocated.

John decided to run for a seat on the City Council after having served for 10 years on the City’s Transportation Commission.

He was frustrated by the difficulty LFP citizens have in accessing the abundant transit service that flows through the city on our highways, and hoped to make it so that transit riders don’t have to park in our neighborhoods in order to catch the bus.  Through his work on the commission he was able to get $500,000 from Washington State for a Park & Ride within the city.

Feeling that he could be even more effective as a councilmember, John ran for office in 2009. 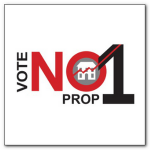 The only dissenting voice on the Council,  John opposed the 2010 Prop-1 levy lid-lift because the City Council majority refused to honor citizen requests to provide comparable budgets showing what would be added if the tax increase passed, what would be cut if it did not, and to put the measure before the voters in the general election instead of the August primary.

The result was a landslide 78% No vote from the public.

Since then City services have been streamlined and gradually expanded,  without any significant increase in property taxes. 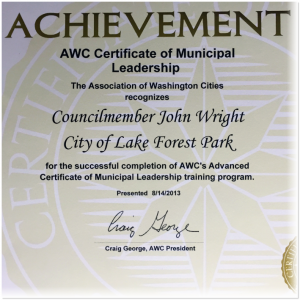 He also earned both of these certifications during his first term in office, which is an extremely rare accomplishment.

John advocated (and the Council adopted) a new approach to funding for replacing the city’s aging stream culverts which has quickly moved these projects forward.

The city had been in line to apply for transportation funding along with virtually every other city in the state, and nothing was happening since too many municipalities were chasing too few dollars.

John proposed the idea of approaching the problem from the stream-side instead of the roadway by applying for flood control, fish habitat restoration, and fish barrier removal funding.

The result has been that LFP has received funding and moved rapidly ahead with replacing failing culverts, removing barriers to fish migration, and restoring habitat and buffer zones to Lyon Creek.  This work is only beginning and there are more than 20 culverts yet to be replaced, but we are off to an excellent start.

By coordinating ahead of the work, the City was able to combine the two projects and complete the most disruptive part of the work in a single weekend rather than over months of phased construction work.  This coordination drastically reduced traffic disruptions during the project and saved over $1 million in construction costs.

Despite record rainfalls since the work was completed, there has been NO flooding of Bothell Way, the Town Center Mall, or the Sheridan Beach neighborhood!